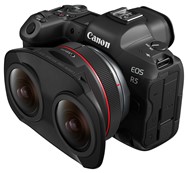 Canon today announced the launch of the EOS VR System, a new virtual reality (VR) video production system. The system includes one dedicated lens and two computer software applications, which will be available from end-December 2021.VR is increasingly used in many industries including entertainment, tourism, and education. With the increasing market demand for VR, Canon is leveraging on our optical technologies nurtured through the development and production of the EOS interchangeable lens camera system, to establish a new VR video production system that realises high-quality images alongside an efficient production workflow.The new EOS VR System consists of mirrorless cameras[1], a dedicated lens, and computer software. Users can capture VR images by attaching the dedicated lens to the camera, and then utilise the computer software to convert the resulting image files to a standard VR file format, making the post-production process easy.By establishing this system, Canon hopes to cater to the wide-ranging needs of various users, be it VR image creators, production house or new users just starting their VR video production journey.A Dedicated Lens that Achieves High-quality 3D 180-degree VR Images[2]The new RF5.2mm f/2.8L Dual Fisheye lens is a dedicated RF lens equipped with two fisheye lenses, which produce parallax effect that can be used to create 3D 180-degree VR images. When attached to the EOS R5 mirrorless camera, the lens enables users to harness the camera’s 8K[3] recording capabilities to produce ultra-high-definition video with an immersive feel. As special lens coatings are used, shooting in backlit conditions becomes a breeze.An Efficient Workflow, From Shooting To Post-productionThe light rays that enter each “eye” of the RF5.2mm f/2.8L Dual Fisheye lens are captured by a sole CMOS image sensor. This removes the need for certain parts of the traditional VR production workflow, such as aligning and syncing camera positions before the shoot or stitching images together in post-production, resulting in greater efficiency. Depending on their post-production environment, users can choose to convert their videos into VR format using either the EOS VR Utility[4] computer software or the EOS VR Plugin for Adobe Premiere Pro4,[5], which further support the post-production process.[1] Current compatible camera: EOS R5. Requires firmware update, to be available from early December 2021.[2] VR videos that have a 180-degree field of view. A VR video format commonly used on video distribution platforms such as YouTube.[3] 8K resolution fisheye video footage is recorded into the camera.[4] For trial purposes, still images and videos not more than 2 min long may be converted into VR format free of charge. A paid subscription plan is necessary for full use of the features beyond the trial. Compatible with Windows/ macOS.[5] Plugin: A software that expands the features of an application. Supports Adobe Premiere Pro Ver. 14.5 and above.

Achieves 3D 180-degree VR video with the signature L-lens high quality・Equipped with 2 fisheye lenses, the lens enables capturing 180-degree VR footage in 3D by using the parallax between the left and right images. ・180-degree VR footage has half the field of view of 360-degree footage. This reduces the volume of data generated and produces high-definition footage that is easier to handle, excellent for creating highly realistic images. Camera operators can also focus on shooting with the knowledge that they will not be captured in-frame.

This is an L (Luxury) lens, designed and built to provide the highest standards of depictive performance, operability, and durability. The large f/2.8 maximum aperture enables the capture of bright, high-quality images.

High image quality is achieved by harnessing the advantages of the RF mount’s short back focus system alongside a lens configuration where each fisheye lens incorporates two effectively placed UD lens elements[1]. The lens configuration also optimises the bending of light rays, achieving a natural parallax effect with a 60mm base length.

The left and right lenses are each equipped with an Electro-magnetic Diaphragm (EMD) that electronically controls the aperture diameter. ・The lens features a gelatin filter holder that enables an ND filter to be installed. This makes it possible to control exposure even during daytime outdoor shoots and other high-contrast situations where the shutter speed might unintentionally speed up and helps to ensure seamless video shooting.

Dust- & Drip-resistant[1] sealing is used on the mount and focus ring.・SWC (Subwavelength Structure Coating), a special coating, is applied. Numerous nano-sized wedge-shaped structures smaller than the wavelength of visible light are lined up on the concave surface of the frontmost lens element to control internal light reflection. This reduces ghosting, which is the manifestation of internal light reflection on images. Lenses used for VR imaging tend to have a larger incidence angle, and the coating makes it easier to shoot with them in backlit conditions.

３．Realises an efficient workflow from shooting to post-production ・The light that enters each “eye” of the lens can be recorded with just one CMOS image sensor. This removes the need to adjust multiple camera positions and synchronizing settings before the shoot, or to stitch images together in post-production, thereby streamlining the production workflow. To conduct remote shooting, which is often necessary in VR image production, users can use either EOS Utility[1], a software that allows them to change camera settings and transfer images from their computer, or Camera Connect[2], a smartphone app that lets them check images and change camera settings using their smartphone.[1] Compatible with Windows/ macOS. Requires update to Ver.3.14.30, to be released in early December 2021.[2] Compatible with iOS/ iPad OS/ Android. Requires update to Ver.2.8.20, to be released in early December 2021.

Key Features of the 2 Computer Software ApplicationsBefore viewers can view the 3D VR footage on a head-mounted display (HMD), the footage captured by the camera must first be converted into a VR file. The conventional VR image production workflow therefore consists of 4 stages: shooting, checking, post-editing, and file conversion. Under Canon’s VR imaging system, images are captured using just one camera with one CMOS image sensor, rendering the parts of the workflow that were necessary with a two-camera system—such as aligning the positions and synchronising the settings of the left and right cameras before the shoot—redundant. It is also no longer necessary to stich footage before file conversion. Additionally, when users convert files with either the EOS VR Utility computer software or the EOS VR Plugin for Adobe Premiere Pro dedicated plugin for Adobe Premiere Pro (sold separately), they can also automatically straighten images and correct lens parallax during conversion, improving workflow efficiency.

The two conversion software applications both support the conversion of images into equirectangular projections, a standard VR format. EOS VR Utility supports image conversion and post-editing, allowing the flexibility to adjust the image quality and file format according to post-processing and display environments. Meanwhile, EOS VR Plugin for Adobe Premiere Pro enables file conversion and post-editing to be done under one roof within the Adobe Premiere Pro video editing software.

How VR images are created

Exhibition at InterBEE 2021The VR imaging system will be exhibited at the Canon booth at InterBEE 2021, a professional exhibition for the audio, imaging, and broadcasting industries that will be held in an online-offline hybrid from 17 November (Wed) to 19 November (Fri) 2021.Market Trends for VR Imaging EquipmentThe VR market is growing, especially in the consumer entertainment and corporate education and training sectors. There is a wide range of VR applications. For example, it is used in the gaming and tourism sectors to provide simulated experiences, in the real estate sector to enable virtual tours of rooms, and in site inspection to guide workers through work procedures. In recent years, the sports industry has also been disseminating more VR videos. The growing range of services utilising VR means higher demand for the production and distribution of large volumes of high-quality VR content, hence also increasing the demand for the imaging equipment to support VR production. (According to research by Canon.)* IOS is a trademark or registered trademark of Cisco Systems, Inc. in the United States and other countries and is used under license.* MacOS and iPad OS are trademarks of Apple Inc., registered in the United States and other countries.* Windows is a trademark or registered trademark of Microsoft Corporation in the United States and other countries.* YouTube and Android are trademarks of Google LLC.* Adobe is a trademark or registered trademark of Adobe (Adobe) in the United States and other countries.* Other company names and product / service names mentioned are generally trademarks or registered trademarks of each company.